There were so many cute pictures from this day that I had to separate them into two separate posts! 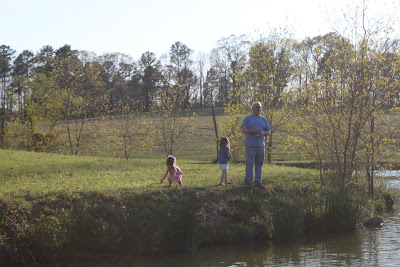 Pops showed up the other day to fish in our pond. Have I mentioned we have a pond? Surely I have shown a picture or two that would've explained that! 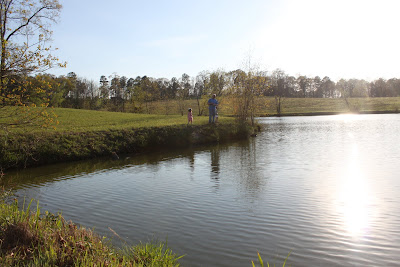 Anyway, the girls (especially that little one!!) usually hardly leave my side. Seriously, I have some shadows! 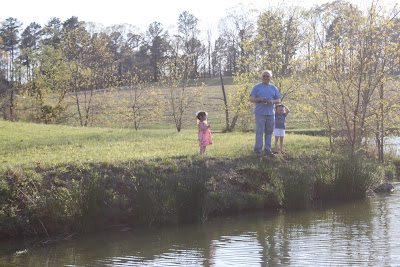 But with Pops there, as well as Emma Lou, showing up from next door, they gave me plenty o' space! 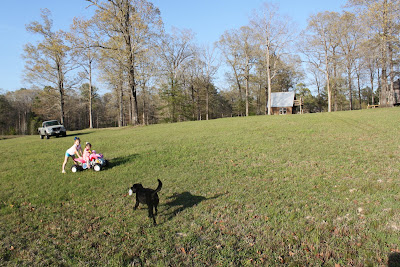 ANd what did I do? I hung out with them anyway! It was such a beautiful day, and I don't get to spend much time with Pops either, so I just stayed down at the pond with them. Have I mentioned we have already been in the swimming pool? It has been THAT warm! I love Louisiana!! 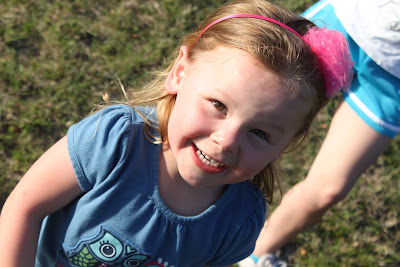 Then I decided I'd cast a rod sitting next to me. 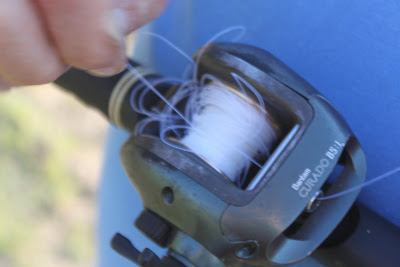 Then, Pops spent the next 45 minutes or so trying to UNDO what I did! Sorry, Dad!
This is Emma Lou's new dog. Actually, it's her brother, Clayton's. Her name is Belle. 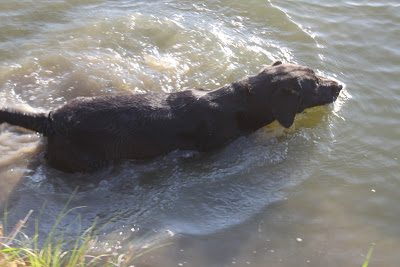 Pops spent some time trying to get Gabbi moving on her four wheeler. A short while later, I realized it was outta juice and had to push that thing ALLLLLLL the way up the hill. I am seriously out of shape! 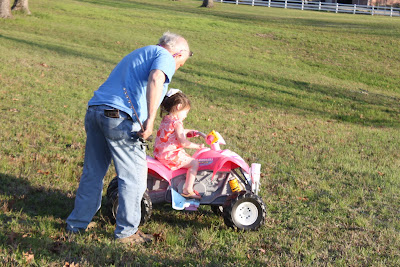 Isn't it beautiful here. I tell Todd how totally blessed I feel to get to live here. It is so serene! I can't wait to do my art retreats to share it! 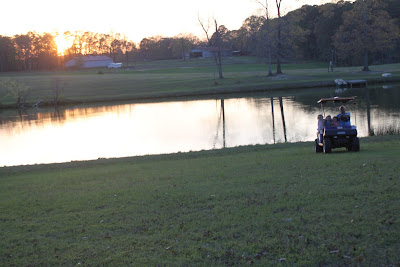 And have I ever shown the golf cart that I got all dolled up for my beloved for his 38th birthday?! 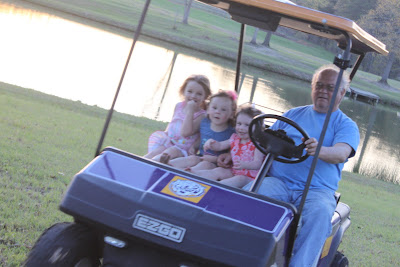 Awwww... I think this one may need to be blown up! Look how proud Pops looks of his girls! 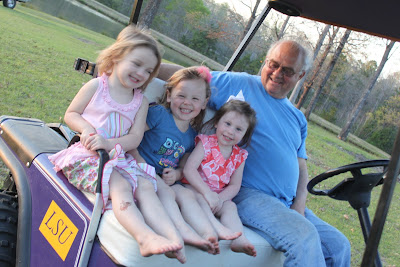 It's kinda weird... he had three grandsons. Then BOOM... three granddaughters! 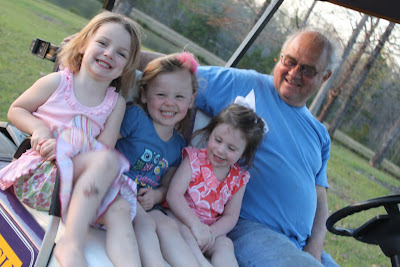 On our side, at least. 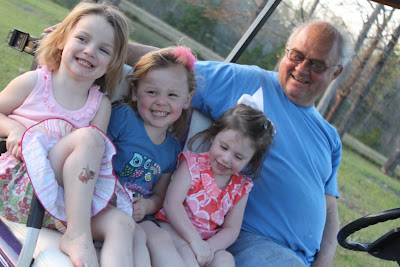 They would've ridden with Pops all evening long. They were having a ball! 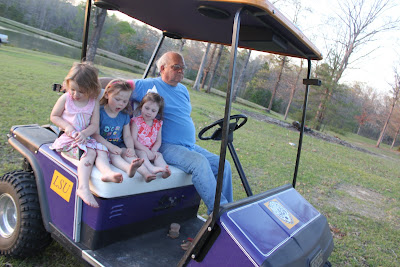 Then, I asked Ellie about the fish Pops caught. She described it like this.... 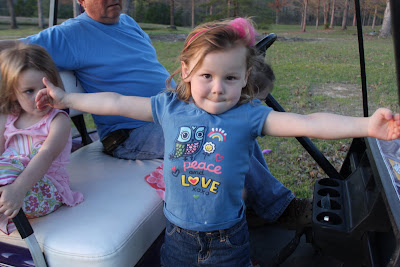 and then changed to this.... 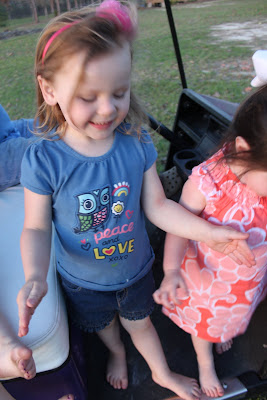 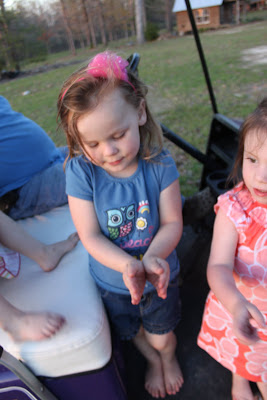 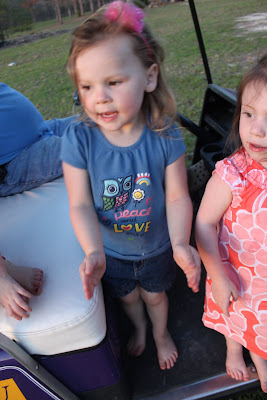 and finally settled on this.! 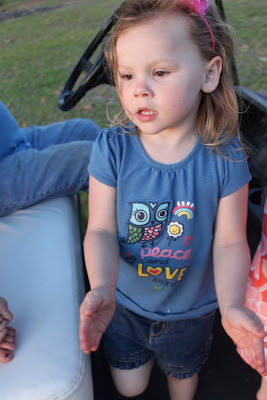 it was such a beautiful day. A great way to spend an evening! 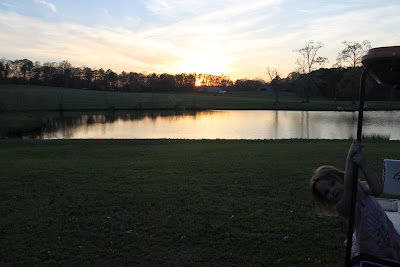 Come back soon, Pops! We love having you!
MO
Posted by melanie, aka Mo at 9:51 PM

Yes, you are lucky! Beautiful place to live. Wish I lived closer to see it. Those girls are growing up fast!!They are all so cute and I, being a grandma to 15, know that look of pride. Grandchildren are the absolute best things God has ever given us. They are what keeps us alive. Wish I lived closer to mine. It will be 20 degrees here tonight. Ohio doesn't know it's spring. We are stuck in winter still...LOL.

So jealous of your warm weather!!!! Here in MD it is so cold I am so ready for Spring. Love the pictures sure wish my kids had a grandfather. Cherish those moments

It is a beautiful place for some beautiful times! That is a proud pop picture. Still very cold in Chicago, but my son is still trying to wear shorts.

Loving the pictures of the girls with Pops!!

Such tranquility! I used to have a small pond behind my previous home. I miss it! Enjoy yours!

Great pics of Pops and the kids, and I love that you pimped Todd's ride - the golf cart, that is! ;-)