Ok, by the end of this week, you are going to be slap SICK of princesses! Trust me on this! 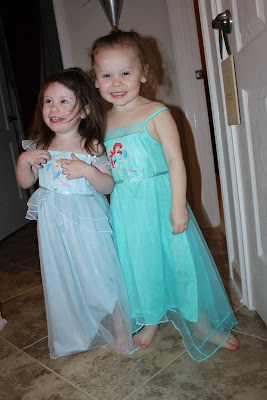 We ate breakfast with princesses, stood in 45 minute lines to hug princesses, bought $60 princess dress up clothes, and naturally had to have the princess gowns too! 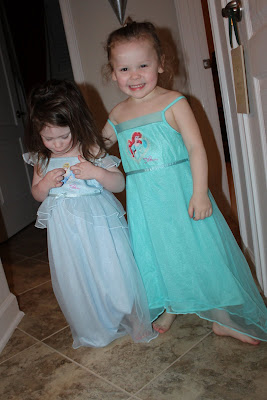 Honestly, I DID exercise restraint in the souvenier department at Disney! In fact, I most of the time just decided to totally avoid the souvie shops so I (ahem... ELLIE!) wouldn't feel the need to buy every knick knack known to mankind! 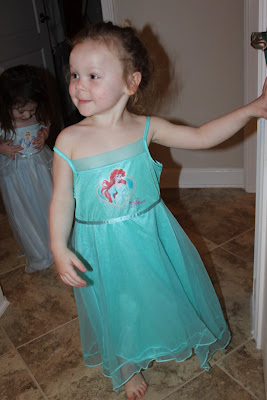 On any given day, the "favorite" princess would change. It flip flopped between Ariel, Belle, Cinderella, and Aurora (Alora!). 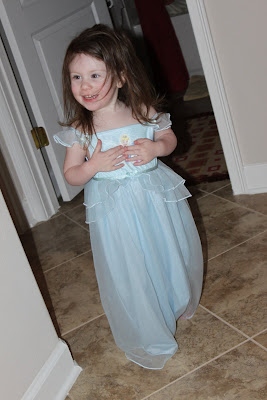 I would say Gabbi stayed pretty steady with "Rella". She didn't really know this world until this trip! She was more of a Dora kind of gal. NOT now!! Now she wants to watch, "Rella" or "Boo-bies"...(I FINALLY realized that was Beauty and the Beast! Hahahaha), or even for the last day, "No White". 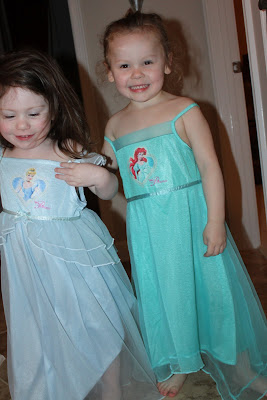 We dont' get to see Todd's parents all that often, so it is always fun for us to be there with them. 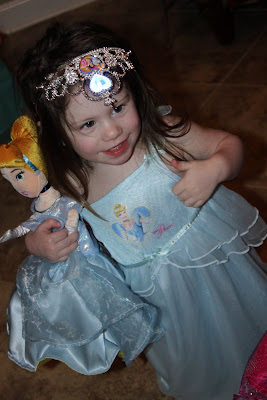 I gotta say, having in-laws in Orlando is pretty awesome! Not that we wouldn't rather have them here with us, but you know, visiting Disney World every time you see your in-laws is a pretty good deal!

In typical Ellie Sue form, she would rock it out every night and tell funny stories, and ham it up! 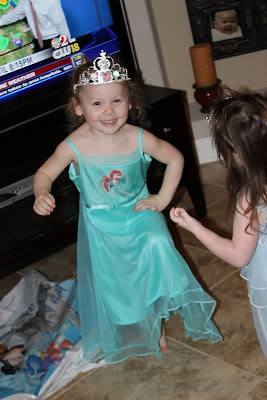 On this patricular night, she played her new pretend CD player that was the best 5 bucks I ever spent at Dollar General! 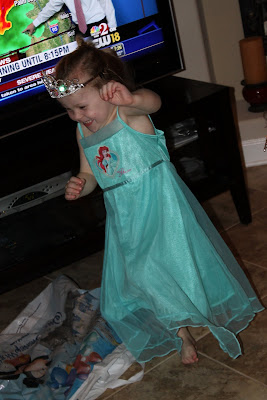 Please note the TORNADO WATCH on the TV in the background. Wouldn't you know?! 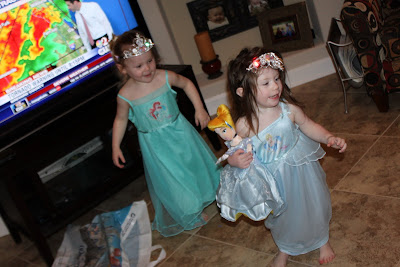 Didn't steal our joy though! We never missed a beat while down there. Our daddy kept his little smart phone on and was tracking that storm every inch of our outings! On this particular day, he said, "Ok, I think we should start heading to the car", and by the time we were exiting the DW gates, it started sprinkling. Yay for an organized daddy! If it'd been up to me, we'd been wearing raingear!

Anyway, back to Dance Dance USA! 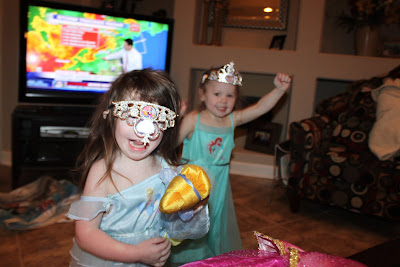 Gabbi Girl INSISTS on wearing her crowns upside down. She won't let us fix them! ANd would you look at Ellie's face? Talk about giving it 110%! That girl is about to poop out a white glittery glove! 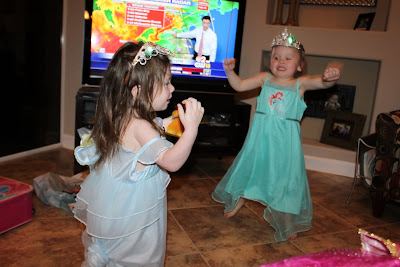 And Gabbi TRIES to be a big girl and dance, but she just can't quite let go of her baby Rella! 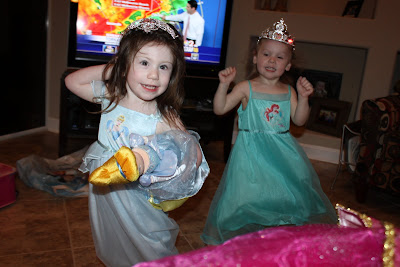 I have many, many Disney pics to share, so get ready peeps! Gonna be a crazy week! Mo
Posted by melanie, aka Mo at 9:07 PM

SO sweet!! and I am CRACKIN UP at "poopin out a glittery glove!" Welcome home! See you Tuesday!

love it - bring it on!!!! makes me think of caitlin as a toddler and how much she loved the princesses too - between us and the mil she had all the princess dresses and gowns and the shoes and the crowns, etc!!! she even dressed jonathan up sometimes and he made a beautiful princess lol!!! and of course caitlin is now 17 and i can't even talk her into looking at prom dresses...

Oh Mo, you had me losing it about the white glittery glove!!!
It looks like everyone had a blast!

Back to reality on this manic Monday!

No tornado warnings here - we're gearing up for upwards of 18" of snow over the next couple days....yippee!

That is so precious. I love how Gabbie wears her crown. She dances to her own BEAT lol. my youngest child does this. He does his own thing and doesnt care what people think. :)

That upside down crown is too cute! Glad ya'll got to spend time with Todd's parents...I know the girls enjoyed it. That look on Ellie's face is hilarious...she's giving it all she's got, isn't she? Can't wait to see more pics :)

Ahhhh work it girls!! Watch out I think we got some NEW contestants for the "So you think you can dance" show!!! Go Ellie, Go Gabbi, GO! GO! GO! GO!

LOVE the photos....nothin like two little girls playing dress up in gowns and crowns! You're making such wonderful memories, thanks for sharing.

Oh, and saw Don & Staci's lottery story on tv yesterday. Still can't BELIEVE how blessed they were to be able to keep Jake's love alive by blessing others by winning! One darling little boy, continuing to touch the lives of so many. :)

LOVE IT! This Disney fan never gets tired of Disney stories. Give me more! Oh and that gown looks like it was made for Ellie. The coloring, fit length -- all of it. Too precious

what a magical memory for your girls. i can see the excitement in their precious faces!

Could'nt help but notice how little Miss there is about to catch up to her big sister! Adorable! Hugs from Fort Worth!

Can't wait to see more pictures. Loving all these memories you are making with your girls and being able to share in those moments. I'm living through you vicariously since don't think I'll ever have my own princesses. I love having my princes though and know it's have me from a lot of dress up clothes buying. Loving forward to seeing more pictures from Florida and of course more talisman and home pictures to. Keep them coming because we are loving them all.

Can't wait to see ALL the pictures! SO darned cute!

Love the princess pics. They are truely princess material!