Hey... thanks for all that Ellie LOVE! Had a great party! More on that later this week. For now...

Meet Steven. Not the horse whisperer. Not the King of pop. Nope... just... THE COTTAGE MOVER! 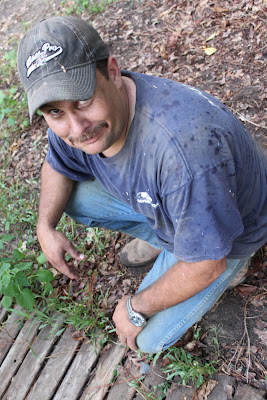 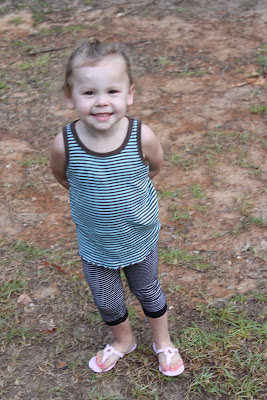 In another of her interesting clothing combinations.... an ugly tank top, much too small leggings, and new flipflops. 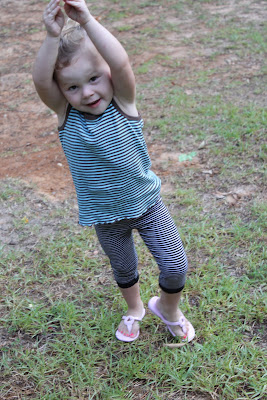 ANd waaaaay back there in my garden, you can see my little cottage. 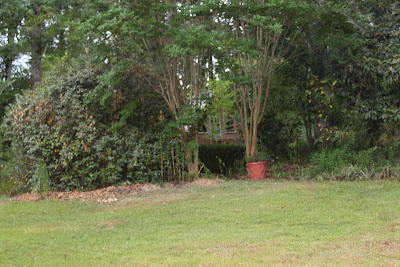 It is the last picture I will ever have of my cottage tucked up in its former spot.

Yep, there she is, in all her glory! 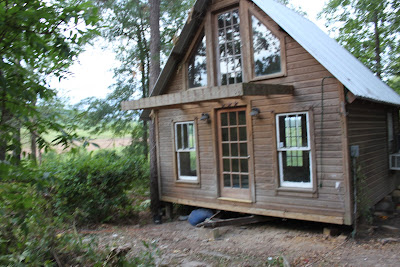 Steven and crew had to take off the front porch and balcony to get this monstrosity of a trailer/ steel frame/ axel thingy up under it. 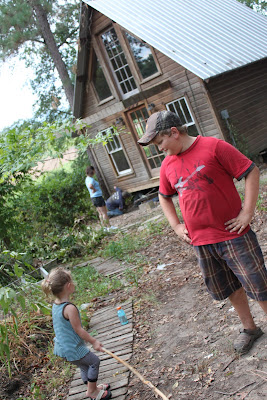 And this is Connor. He is Steven's boy. And I was so impressed that he was at work with his dad everyday. I think more kids should learn about work at an early age. Not necessarily DO the work, but at least see how much is involved in earning a living. That will be for another day! 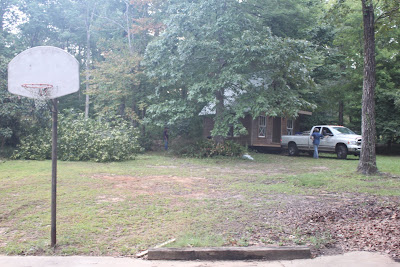 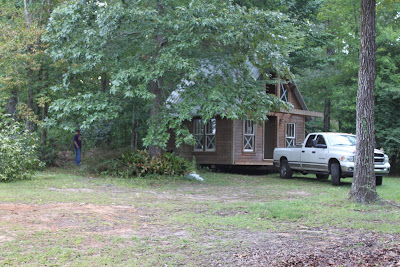 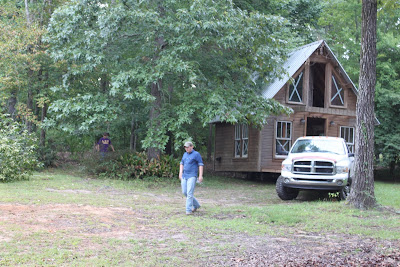 We had to cut down a hickory tree to get it out. I can't stand to cut a tree!

But it had to happen, sacrificiously, for ol' Bessi to get to her new home. 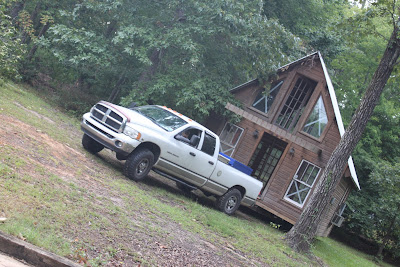 Steven taped up the windows to keep them from cracking. 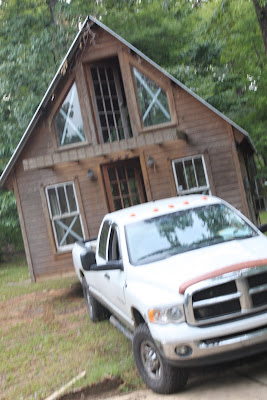 Lots of the cottage windows are really, really old and single paned. 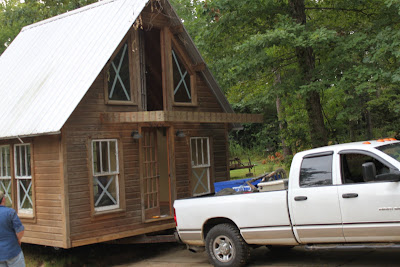 Well, she is down the hill, and now the real production begins. 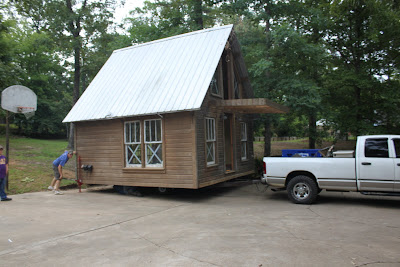 The first to show up... the state troopers who would be accompanying this convoy. 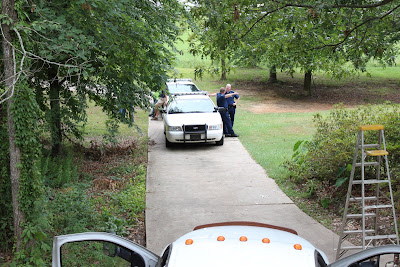 We also had to call in the cable company AND the phone company to help with lines along the route. 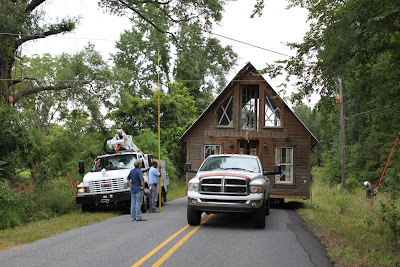 One of Steven's hands apparently RODE in the loft of the cottage and took pictures for me through the back window. I had to go to work, so I left him in charge of all photo documentation. He did a pretty fine job, I must say! 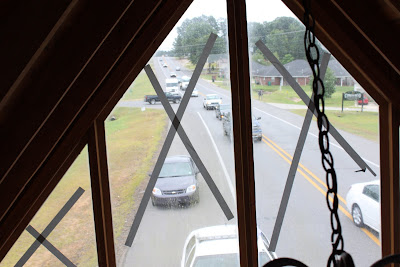 Here she comes down a major thoroughfare here in West Monroe. 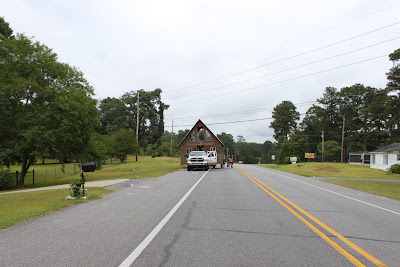 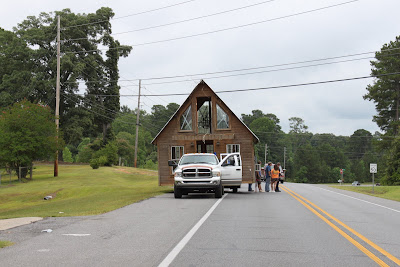 As I see it, it was quite the orchestrated production! 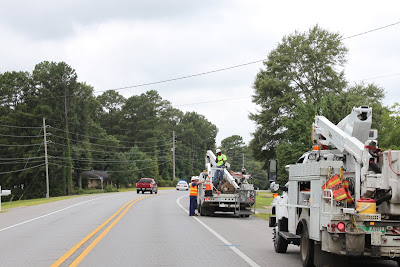 But if Todd asks, it was super simple, easy breezy and CHEAP! (not!) 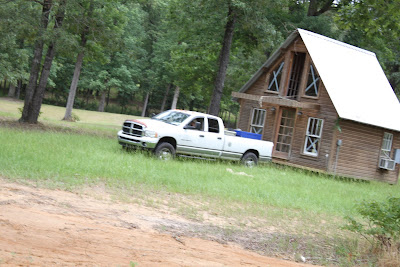 Ahhhh.... the we made it to the new homeplace.
See Staci and Don's house way over there?! 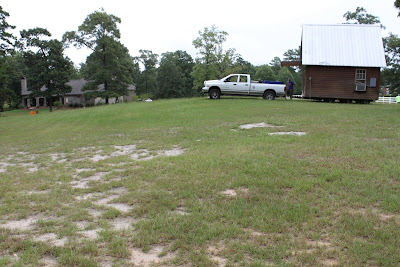 Come on in, Bessie. You are home! 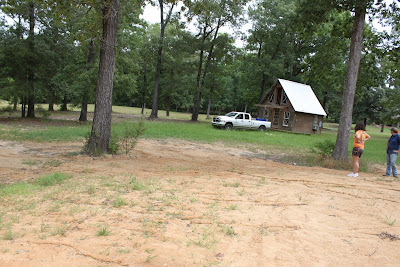 I made it out to the BAH in time to witness this final setting of the cottage. I DID NOT want to leave this detail to BOYS! 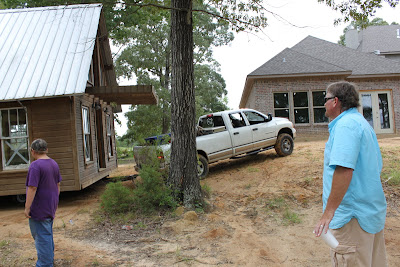 Steven was so patient with me as I flailed my arms around in the air, saying, no a little more angle to the right... no back to the left...

I guess he has a wife! He understands the ways of the woman. 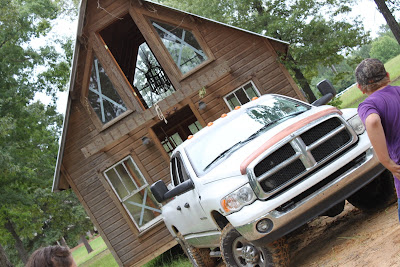 So, from the front right side of the house, this is the view, SANS landscaping, of course! 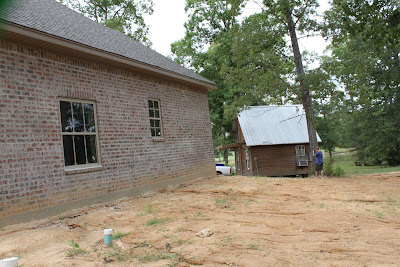 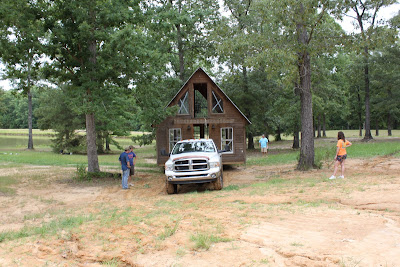 Yes, I think I am liking that angle. I think we are about there.... 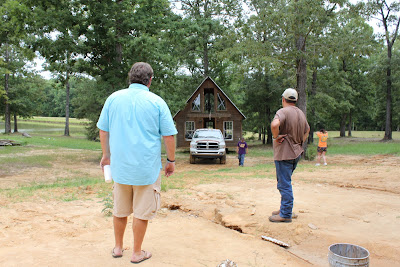 I went inside to check it from every room. I can view the young uns playing in it from my private den off my bedroom, my bedroom, the screened porch, the kitchen, the dining room, and Todd's outside cooking area.
Yep. I think it is in the perfect place. Stay tuned tomorrow for more details and a final picture of Bessie in her new spot. Thanks, Steven, for putting up with my neurosis and getting it perfect!
Mo
Oh, and I just found out that the voting is due next week for the Best of the Delta. Do me a favor. Go HERE, and vote for Melanie Massey Physical Therapy as best therapy clinic. If feeling ambitious, also vote for Accountant, my friend Tashia, and Dance class... Linda Lavendar School of Dance! Thanks for voting! Just enter your email and start clicking. I appreciate it. Mo

Oh, thanks Sandy... I also forgot... vote for Spoiled Rotten, as children's clothing store!! Oops. That is Staci's store! Mo
Posted by melanie, aka Mo at 7:18 AM

Hooray! The cobbage is home where she belongs. All will be well.

Yeah for the cottage!! Glad you got it home! I voted and you FORGOT to mention Stacies new store! but just so you know I voted for it too!!

Welcome home cottage! Don't feel too upstaged by the BAH, you have unique charm! :)

How COOL is that!!!
Thanks for sharing the moving of the cottage. I am so happy that you were able to TAKE it along to the new BAH!!!

Looks like quite a production for sure. The pictures were like out of a movie. I can't imagine the cost of that!

I voted for EVERYONE!!! And I'm so excited about the cottage. I've got to get back to work!

So glad Bessie is "semi-settled" in her new home. I'm sure she's gonna love it. Thanks for the play by play of her moving experience. It was a real "nail biter."
I voted for all four of your suggestions. I know you are all WINNERS!

im happy you have the cottage home now and i love seeing the pics of it being moved i know you cant wait to get in there and get everything moved in thre and unpacked so you can start your artsy work.or are u doing that in your art room in your new bah. well anyways i ordered one of the jewelry kits i cant wait to get it and get it made. i will send you a picture of it when iam done. i love love your art stuff cant wait to see what all new stuff you are coming up with.. well im going to go hugs and love ya

I'm so glad you got the cottage moved. It's so cute!

I am so excited for you! I have cast my votes for all.

I love hearing about the BAH and seeing pictures. Looks like Bessi is in a perfect spot.

That is awesome!
My voting is done. Seriously, best pawn shop????!!!! That is hysterical!!

Hmmmm, if she didn't own an ugly tank top she couldn't wear it. I'm just saying.

My husband used to be a State Trooper (retired now) and did lots of escorts although I don't think he ever helped move a cottage. They are well orchestrated and involve lots of people. Glad it was moved safely. Elaine

What an adventure!! You will be so glad you have it with you though. Happy late birthday to your sweet, fun, spirited Ellie!!