Mamas and Babies in pool 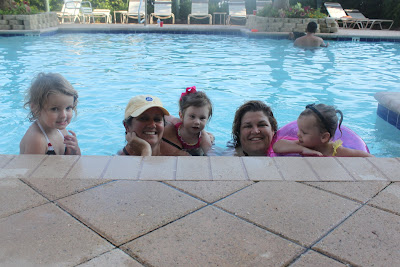 We're home, but that doesn't mean you get to stop seeing beach pics. NO Ma'am! That won't happen for at least a week! I mean, I took waaay more pics than I had days to post, so settle in! 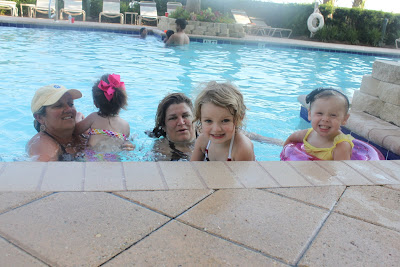 Oh LORD, Ellie, I think "the smile" is getting worse! (And maddi has the "only lower teeth" smile going on!) 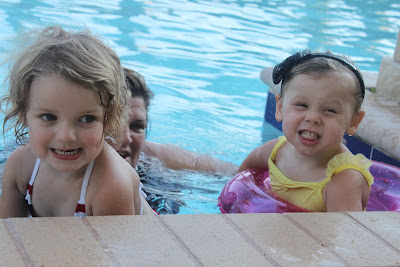 Now THIS Is a cute picture. It may make the condo wall. Management be damned! 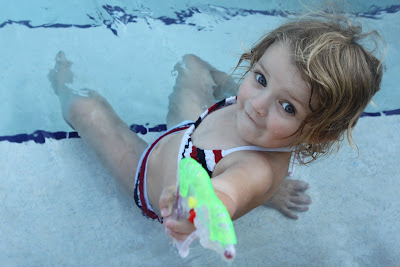 Or maybe this one. Staci and I prefer pictures of us at the beach where our faces are showing,but our bathing suit-clad bodies are SUBMERGED!! 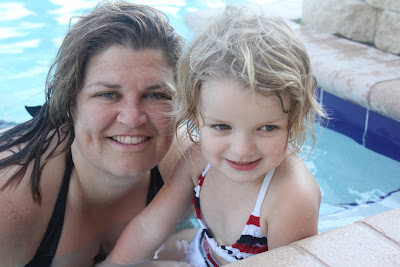 Another reason I LOVE having Mary Allison at the beach... she totes the camera as much as I do! Thus, I get to be in pics with my girly-goos. 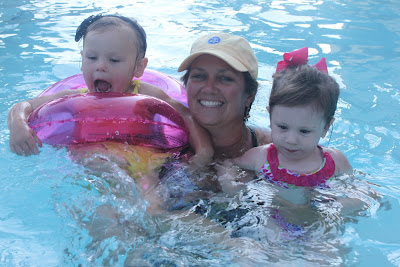 Even if my girly-goos choose to NOT look at teh camera. Sometimes, it is not worth the fight. 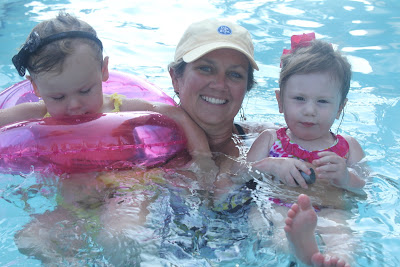 (Have I mentioned that Ellie is a bit stubborn?) 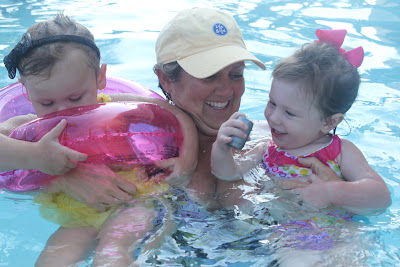 There you go, MA, just cut her out if she refuses to lift her head off the raft. We'll show you. (Yes, I am talking to a two year old!) (and acting like an 8 year old!) 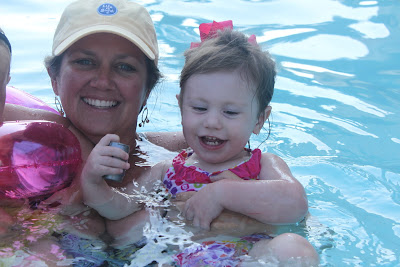 This precious angel loved her mama at the pool, but might I say... whatever it is about home... she has become a HIP ORNAMENT since we have gotten home. KK!!! Where are you?! 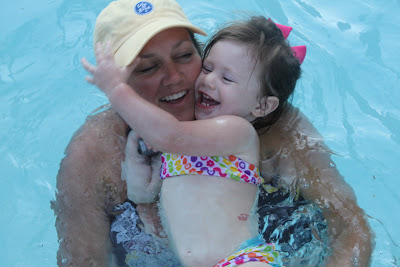 I hope you don't think I don't love and cherish my kids! I do, really I do. But I am talking from the moment this one gets up, she is CLAWING, yes CLAWING (it is how I know she needs her nails cut) my chest to stay on my hip and to prevent her feet from coming from within a foot from the floor! 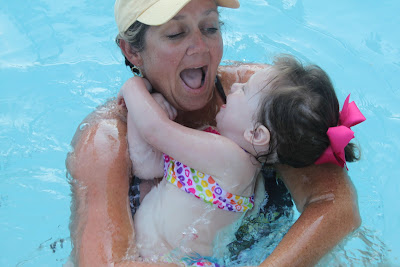 It 's ok. I know this time will come and go, and I will be begging her to come and hug me and give me "awweees" and sugar. 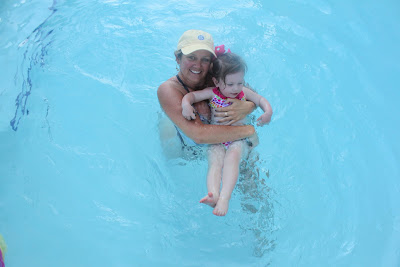 I don't know though, because there is a part of me who thinks she is going to be like that character on SNL who won't go play with her friends, because she thinks her mom and dad are so cool. You know that character? She was on there last night, with Alec Baldwin hosting.
I may be saying, "oh, go with your friends, Gabbi. It'll be fun."
"But I want to stay here with you, mom! Let's play Uno!" 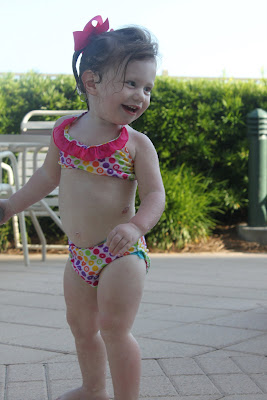 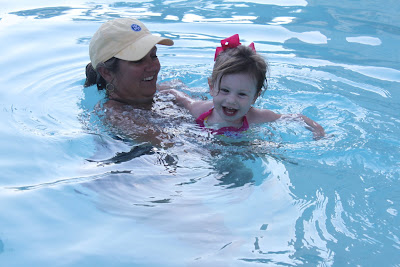 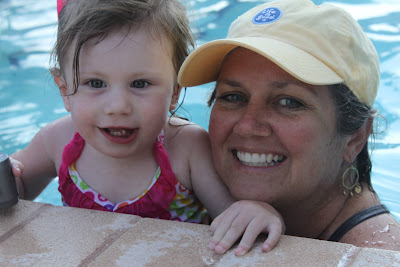 Another little bit of therapy info. See that lower tooth in Gabbi's mouth? Well, did you know that early on, teeth form to what is going on inside the kid's mouth? That is obvious when you think of a chronic thumb sucker whose teeth buck out. Well, the same is true for other dentation! Gabbi is not talking much at all. She says words, but her "sentences" are CRAZY! They are jumbled jargon! She does not have good control of her tongue. Same is true for her lips. In fact, I have to remind her and let her mimic me to even pucker for a kiss. (A pretty basic oral motor skill.) Because that tongue isn't being used normally in speech, she is not putting the appropriate amount of pressure on those lower teeth, thus they are not lining up straight. No worries... they will!
Any speech pathologist out there care to elaborate?! 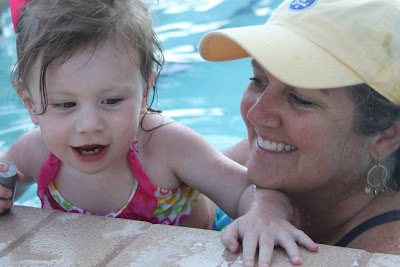 WHAT? Is Ellie Sue going to lift her head? ONly because I started a Peek a boo game. Both girls are suckers for this! 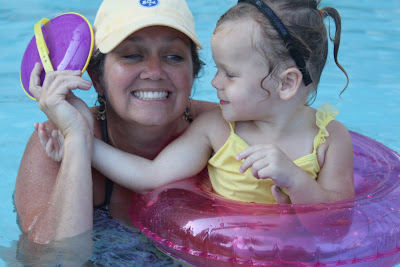 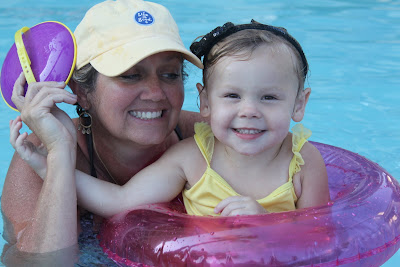 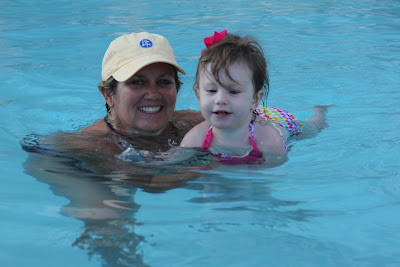 It is like a crazy mirror at the fair. You aren't sure if we are bigger or smaller or taller or... 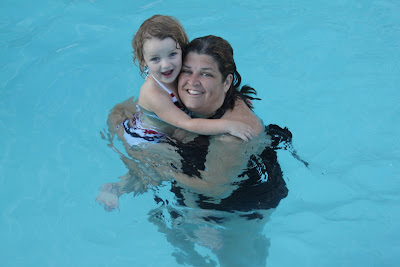 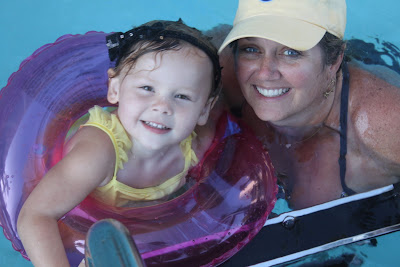 Staci and I got a lot of pool time with our babies!
One of the books I am still working on is "The Happiness Project". ( I know it should be underlined, but whatever!) I LOVE it so far, and am pleased to say that I think I am doing pretty well with most of what she says researchers say are the "keys" to happiness! I will elaborate more later. Anyone out there in a book review club who can give me a few tips on how to critique/ review a book? I would love to share, but not exactly sure how to do it with any methodology. I read two more growth/ self improvement books too. 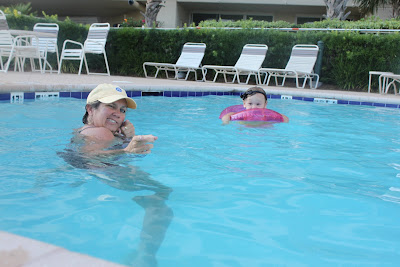 Isn't pooltime fun! I miss those days with my babies(now 34,29&22).Enjoy them while they are young!We had our own inground pool and I loved the time relaxing.

It's been a looooong time since I've been in a pool! But, I really like the idea of having my pic taken while submerged...that just might work! ;-)

That is definitely a photo for the wall! Great pics - such fun and love in every face!

Sweet pictures!! You will be so glad you were in some pictures with your girls. Lots of parents don't want in pictures, I think they will regret that later. I want to hear more about the "keys of happiness"

All of you make me smile. Lots of framers in this batch of pics!!!

Absolutely precious photos. Melanie, call me crazy, but I noticed your earrings and love them...did you make them?
I'm gonna have to check out that book.

Mo,
I just love that all teeth smile from "E" lol she is a ham "FO SHO"