Waves and WHeels and JOR!

Alright, want to hear about what we did weekend before last?! 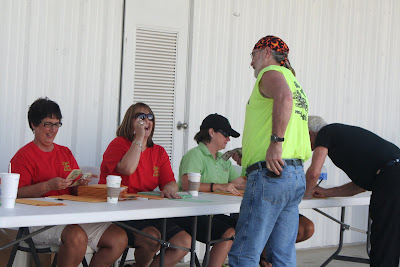 We all got up earlier than we wanted on a Saturday morning to go out and register people for the first annual Waves and Wheels Poker Run in Monroe.  All the proceeds went to the JOR Foundation, so we were ON BOARD!!
Here, Pops and Bonnie, solve some of the world's major crises.  Like water shortage and famine. and why there wasn't any syrup with the pancakes from McDonalds.  Damn those window people! 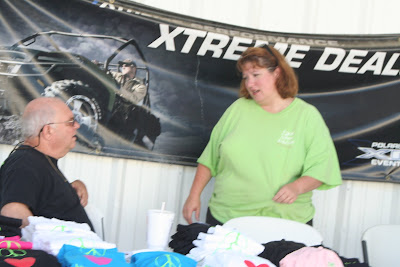 Folks started trickling in, and being this was my first "poker run" and all, I had NO IDEA what to expect! 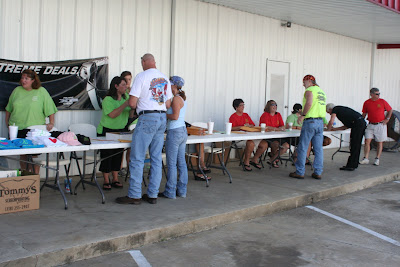 Apparently, Paula didnt' either.  Those pink fake COACH shades are NOT tough, as in biker tough, Paula!  DId you get those on our limo expedition?!  Very biker chic.  Seriously! 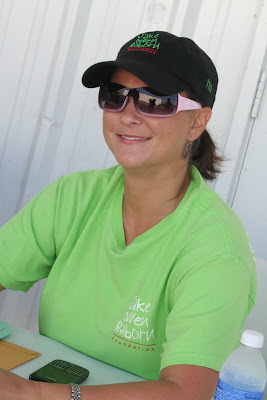 And here is Tashia doing her dangdest to look all BadA** with her black hat on.  CPA's just aren't BadA**es! They just aren't!  Sorry, Tashia.  Get back to serving those tea cakes at the ballet board!
We LOVE you though.  Every board needs accountants!  (Paula AND Tashia are accountants!) 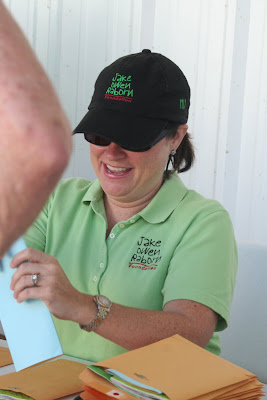 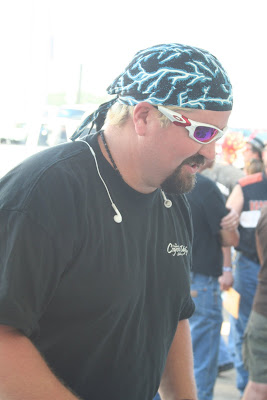 Jussssst kidding.  He does look like him, huh?  Todd LOVES that show.  We have them ALL DVR'd!  Todd can seriously get INTO watching people cook.  Dude?!
Oh, and I strongly considered riding on the back of Brett Michaels, here. 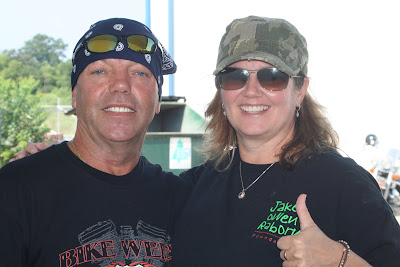 Doesnt' he look like him?!  There must have been some sort of award for best celebrity look alike.  I am going for Cindy Crawford.
And then again,  I am going to lose!
Oh, and man... when this guy came up, a buzz went through the crowd!  This is Squirrel.  He seems to be a legend among the bikers.  I think he even has his own bike shop.  EVERYBODY knew Squirrel.  And now I do too! 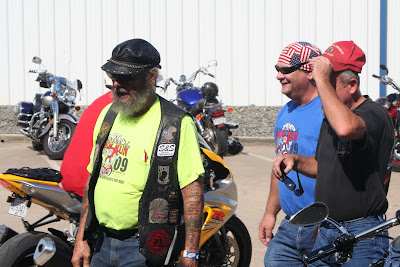 This is pretty cool.  I know Twila from my regular day job of physical therapy!  She and her husband are part time bikers, apparently!  They both bought JOR shirts to wear on the ride.  That was neat! 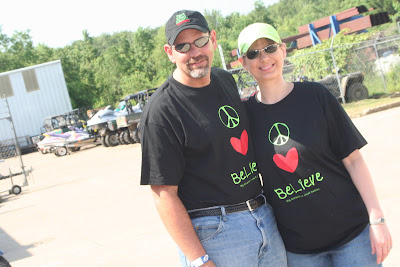 Doesnt' this just remind you of those movies.....
Come on you know what I am thinking....
You just want to push that first one, don't you?! 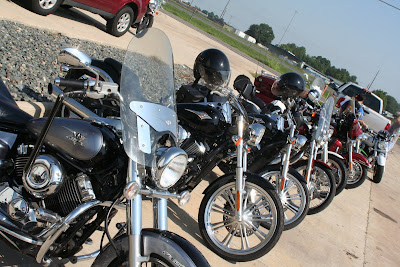 Here is one of the publicity posters that businesses had in their storefronts.  Or in MMPT's case, waiting rooms!!  Look at that cute little toot in that black tee!!  He was something! 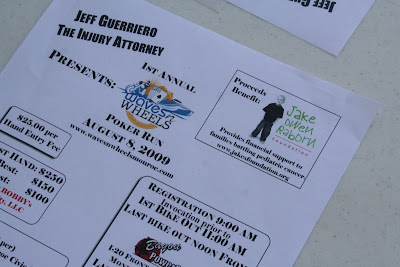 This was a pretty cool scene.  Bikers praying together prior to the ride. 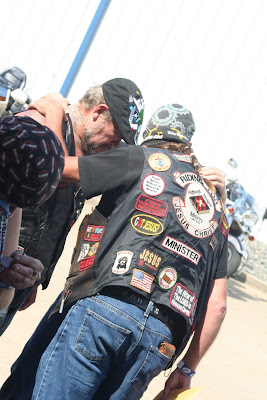 This place was a'rockin at registration time!  I mean look at all the people.  And look at the determination and seriousness on their faces.  They ain't playin! 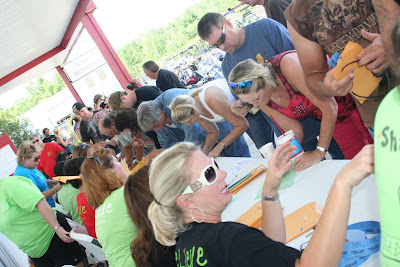 Bonnie was there with bells on.  As was this other volunteer.  Hope she doesnt' read my blog and realize I don't remember her name.  What I DO remember is that she is friends with Amy and Brad Smith (Allen, their son was Jake's best bud at St. Jude!), and she just came out to be a help to the foundation!  So cool! 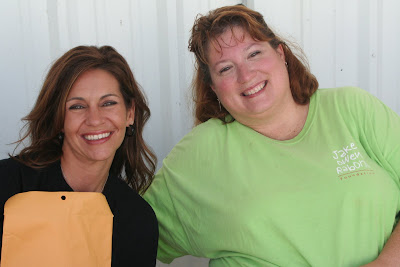 Would you look at this little bevy of activity?!  These biker dudes (and dudettes) were ready to ROLL!  Literally! 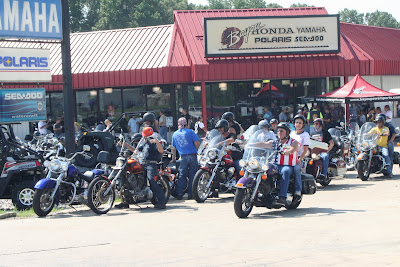 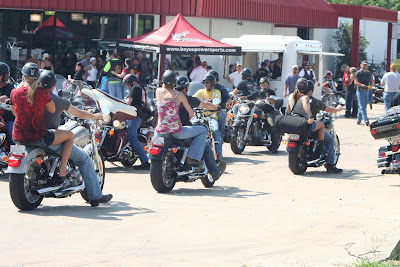 And I have to tell you... this group of volunteers didnt' miss a beat!  Those folks started down at the far end of the table, and made their way left!  By the time they got to me, they were so beat down, it was easy to talk them into a JOR tee shirt!  Ha.  No, really.  Our group was so organized!  I KNOW that the Waves and Wheels powers that be will want us back next year, because JOR took a load off for them!  We totally rocked registration!  THanks, to all of you who helped!! 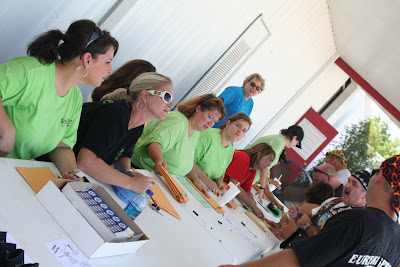 I just HAD to get a shot of this dude's spiky helmet.  I think I would want one like this! 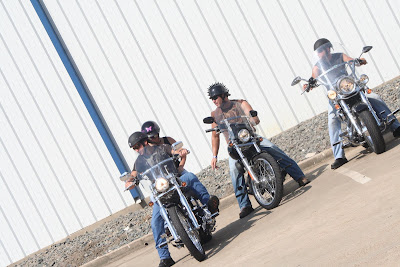 Wait.  Or maybe this!  Does she look ignorant on this chopper in white capri pants and flipflops or what?! 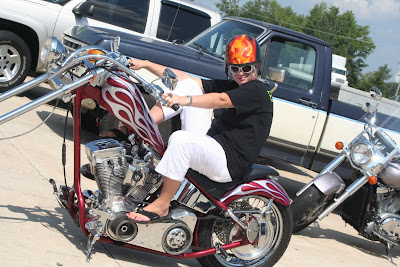 and we ALLLL know she couldn't ride that thing with those claw toes... they would drag the ground and cause sparks! 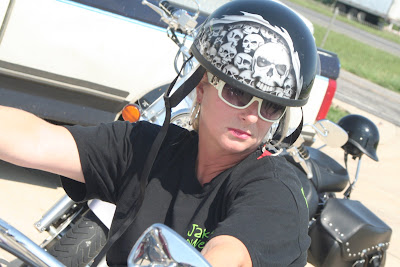 Oh, crap.  That skeleton helmet makes her look pretty serious.  ANd mean.  I take it back, Cindy.  Your toes are short and dainty!  really.
Mo
Posted by melanie, aka Mo at 10:34 PM

how cool!! I did not know this went on!! My parents ride bikes and I am sure them and all of their friends would have come out-- I really should pay more attention to things around town-- NEXT YEAR!!!! love the last post of the three amigos!! They are too cute!! Hey-- When do I get to babysit?!? I am holding you to your word you know..haha!!

Hey, those bikes don't come cheap. And have you noticed that biker groups do a lot of fundraising? They pretty much rock Christmas around here for needy kids. As a matter of fact, my son and husband are riding tomorrow to raise funds for someone's medical expenses.

It is awesome that they are fund-raising in Jakey-poos name. You and Todd could get matching Harley's with carseats strapped to the back.

As for the spikey helmet, when I ride with my husband I am always bumping the back of his helmet with the sticky-outy-thingy on mine. If I had a helmet like that, I would just be stuck to the back of Jeff's head!

Looks like a great time was had by all. Looking forward to Gabbi's birthday party. And by the way, the canvases look great. I am artsy fartsy, so I can tell that most of them are very textured. How is that for covering many topics with one comment?

I think you look pretty tough with your camo hat Mo!! Biker's are some of the nicest people you will ever meet. They really show up to help out kids. I know that they come out every year to honor Christi Thomas and many others.

How cool!! And poor Cindy...I still think that post about her feet is one of the funniest ever! Will she ever live it down?

Mo
Love the post of the Waves and Wheels. We had a blast at our location too. I still have the pictures on CD if you want a copy of them or if Staci wants a copy. I have to come by there next week to pick up my canvas so let me know. Cant wait to see the pictures of Gabbis birthday. Happy Birthday Gabbi Girl.

You sure do make a cute little biker Mamma! I know Jake is so proud of you all, raising that money for the kids, keep up the good work! Love all the pictures! Hugs from Fort Worth!

Mo, I never know what to expect when I come to your blog...and you never disappoint! The pics and the comments are great. I was cracking up, and I don't even know those people.

A great event for an awesome cause...worth getting up early on a Saturday, eh?

Hope it was a great success...

Sounds fun! Yall are always up to something fun!! Where were the girlies at?